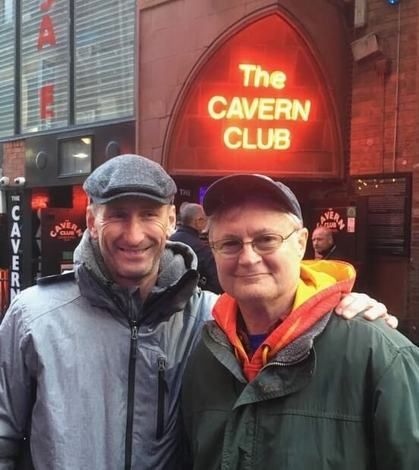 As you might already know, about once a year I get a group of fun-loving, forward-thinking folks together for a group adventure to someplace exotic or interesting. In 2019 it was Ireland.

I think I can safely say we had a blast.

After the the tour ended and the group departed for home, my Dublin friend John Dunne (the handsome one in the photo) and I ferried across the Irish Sea to explore Wales and Liverpool. After a couple of rainy days in Snowdonia National Park, we hit Liverpool on Saturday night.

To say downtown was crowded is like saying the Titanic once had a little accident. We didn't realize there was a major soccer game happening the next day. We didn't know that Liverpool fans (remember, that's short for "fanatics") come from all over Europe for the games. One guy we met came all the way from Moscow.

The streets were packed with groups of girls in micro-mini-skirts, and groups of guys trying to stay upright and follow them while consuming enough pints to float a small battleship. (That's beer, not ice cream.)

So we ducked into a pub, and somehow in that mob of drunken fandom we miraculously ran into two of John's friends from Dublin, Sean and Joe. Joe is a tall, rawboned guy who still played rugby at the ripe old age of 48. But he's an even bigger soccer fan. Which is why he and Sean had flown over for the game.

Joe told us the best bar story I've ever heard.

* This is slightly unsanitary but I hope you find it amusing.

After one of the previous big Liverpool games (they were the best team in whatever that European league is) he was in this very same pub, standing at the bar talking to an older guy, another soccer maniac. This older guy was so thrilled, so giddy, so entirely ecstatic that Liverpool had won, he couldn't stop raving about the wonders and the glories and the highlights of the game.

He talked so loud and so fast that at one point (I am not kidding) his dentures flew out of his mouth and landed on the floor.

Joe, not quite drunk enough to think this was normal, looked at the barmaid, whose mouth was open in horror.

The older guy, unfazed, just kept on ranting and raving to all comers.

* The moral of this story: Don't Drink and Denture?

** I don't know if Guinness contains enough alcohol to
sterilize false teeth, but someone needs to research this.